This is one of the world’s most infamous stamps.

William Robey in 1918 went to the Post Office and bought 100 of the these stamps when they were first issued.  All of them had the bi-plane inverted.  They were the only stamps to have the JN-4H bi-plane inverted.  It was an instant hit as Robey sold the stamps for $11,500.  Last year a perfect “Inverted Jenny” (named after the bi-plane on the stamp) was sold for $825,000.

The Manhunt is Over.

It was an interesting morning in O’Fallon, Missouri.  They had checkpoints throughout O’Fallon looking for an alleged murderer.  I didn’t go into work until I heard they had a subdivision cornered off and had the guy surrounded.  It turns out this happened less than 1/2 mile from my church, Liberty Christian Church.

This was over on shirt.woot.com and I couldn’t resist. 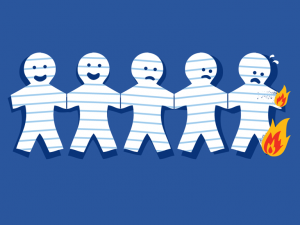